Whip Wilson: Nylon Whips Down Under

When I first started plaiting cow whips as a youngster, I would have never imagined that I would end up making whips that would be used all over the world. To date, my whips have been bought, or used, on every Continent but Antarctica. One of the toughest places to get orders  -as a nylon plaiter especially- is Australia. This may start to change because of a man named James Wilson.

James is from Queensland. He performs  shows featuring whip cracking and characters such as “the Stockman” and the legendary Ned Kelly (if you don’t know who Ned was, think of an Aussie version of Jesse James). James also sells a number of unique Aussie products that he makes himself. James’ latest character creation is nylon whip weilding bloke known as “Whip Wilson,” as seen in these photos. 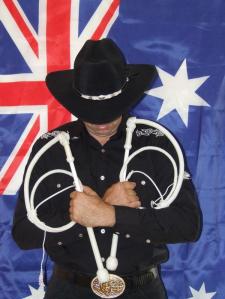 In the past few months, James has ordered 4 of my nylon whips: 2 bulls and 2 stockies. By far, James’ stockwhip order was one of the toughest sets of whips I have ever made.  It was my first time making matched stockwhips. The fact that they were solid white meant I had to be very careful about keeping them clean throughout the entire construction process.

Again, Australia is a tough place to get an order from as a maker of nylon whips.  I have even been told that it’s difficult for some of the well known American leather plaiters to get orders from Oz. What’s exciting for me is that James tells me there are people at his shows who are quite intrigued by the nylon whips. Because of this, I am very hopeful that a small market for nylon whips may be opening up in Australia very soon.

Thanks for everything James!

I am Rhett END_OF_DOCUMENT_TOKEN_TO_BE_REPLACED
This entry was posted on Saturday, April 25th, 2009 at 10:12 am and posted in Australian Stockwhip, bullwhips. You can follow any responses to this entry through the RSS 2.0 feed.
« Deer Hide Project Update
Florida, First in America: Cattle, Horses, and Cowboys »