I originally posted this article on the Whip Basics Forum, but I have edited it a bit and posted it here hoping it would be of some value to my blog readers.

For the record: I consider the “tapered twist” that finishes out the tail of my cow whips as part of the “thong” and not a “fall.”

The fact is, the tapered twist really is a non-detachable part of the thong of the cow whip and -as far as my experience has shown- always been part of what we would consider the “thong” of the whip by both the traditional plaiters, and users, of Florida cow whips.

When I first started selling cow whips on the web, some folks had philosophical objections to me counting the tapering twist as part of the thong –and thus being charged for it. After hearing them out, I was somewhat convinced for a brief period of time that it should be a “fall.” I figured they were the experts, so I would fall in line with their opinion. It wasn’t long until I found it very confusing to try and explain to a customer how my whip had a “twisted fall” that was not detachable and then another nylon fall that was detachable. This simply did not compute with lots of people and it never really set right with me.

After a short time of confusion, I finally decided to keep it simple and revert back to my old standard. The fact is, not a plaiter or cowboy I’ve ever known had made such a distinction and neither would I… So the “twisted fall” nonsense had to go.  I’m glad I made this change because immediately all the confusion ceased and it has not been an issue since that time. 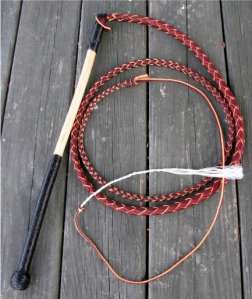 an Aussie stockwhip with a real fall

As for the initial objections some had about the tapered twist being figured in the length of a cow whip because it’s “not actually plaited,” all I would do now is refer them to pp. 26-33 of the Encyclopedia of Rawhide and Leather Braiding. In these pages, Bruce Grant discusses and illustrates many types of “twist braids,” a category into which the tapering twist on a cow whip would certainly fit.

Besides that, I think when it comes to how you figure what is considered the length of a whip (for purposes of figuring price) it’s best to go with the traditional understanding of people who originally made the type of whip in question. For the Florida cow whip, the way we figured the length/price is from where the thong begins, down to the end of the tapered twist. It’s that simple.

I think there are some web based plaiters who are still holding onto the “tapering twist is a fall” theory and that’s okay if they want to do that. However, I’m not getting back on that boat no matter if all the internet plaiters of the world and the U.N. pass a resolution on it.  I’m now putting traditional fall hitches on everything but my cow whips and that seems to have made things even more simple and brought my products in line with the traditional construction of each of the respective kinds of whips that I sell.

For what it’s worth,

I am Rhett END_OF_DOCUMENT_TOKEN_TO_BE_REPLACED
This entry was posted on Friday, May 1st, 2009 at 1:42 pm and posted in Cow Whips, nylon whips, Whips. You can follow any responses to this entry through the RSS 2.0 feed.
« SanSoucie Latigo Whips Arrived!
Granite Slab »