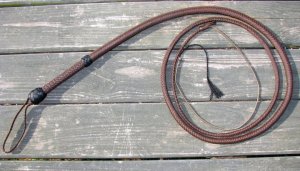 I am happy to announce the latest addition to my line of Indiana Jones inspired bullwhips. This whip is made to resemble the bullwhip seen in The Kingdom of The Crystal Skull and is chocolate brown with black turkshead knots. The thong has a 16 plait overlay around 2 plaited bellies.

The transition of this whip has been lengthened to better resemble the KOTCS bullwhip. A nyl

on whip will never be “screen accurate;” my intent with this whip is not to make a “SA” whip, but to craft a reasonably priced, high quality nylon bullwhip that gives a good general impression of an Indy style bullwhip. As U.K. whipmaker Tony Layzell might say, this is my “interpretation” of the KOTCS bullwhip.

I am Rhett END_OF_DOCUMENT_TOKEN_TO_BE_REPLACED
This entry was posted on Saturday, April 17th, 2010 at 2:32 pm and posted in bullwhips, for sale, Indiana Jones, nylon whips, Projects, Whips. You can follow any responses to this entry through the RSS 2.0 feed.
« Whipmaker Inrto: Steven Susanka
Second Generation Whips »