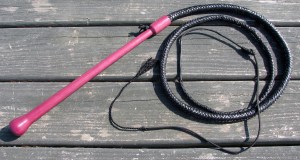 Today I am introducing another up and coming whipmaker. Jesse Hanna made his first whip as a teenager in Texas. He  lives in Canada now and sells his whips to locals. My first encounter with Jesse was when he bought a whip from me a while back.

I recently had the pleasure of adding one of his whips to my collection (see picture). Jesse makes a very unique cow whip. His handles are sleek and beautiful. The whip is very fun to crack. I have really enjoyed it.

To contact Jesse about a whip, email him at cowboycrackers@gmail.com

I am Rhett END_OF_DOCUMENT_TOKEN_TO_BE_REPLACED
This entry was posted on Thursday, May 6th, 2010 at 5:14 pm and posted in Cow Whips, nylon whips, whip makers. You can follow any responses to this entry through the RSS 2.0 feed.
« Second Generation Whips
Ordering Update »