I want to show some of pictures of the whips made by Noah A., one of my long time whip customers who recently got a copy of my whip making DVD.

Here’s some of what he had to say:

I thought I would give you a little feed back on your DVD.  I found the detail where to drop certain strands and plaiting in a odd number of strands very useful.  As I had been just waiting for the strands to start to bunch up before dropping two strands at the same time, always ending up with a  lump and gaps in my thong. It was quite frustrating, so your video was a huge help in that regard.

Here’s the Florida  Cow Whip that Noah made: 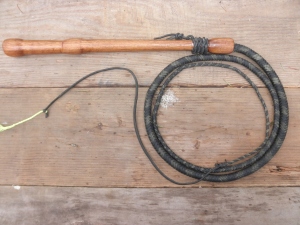 Now, some people think that because my DVD doesn’t specifically deal with bullwhips, then it is not useful for making bullwhips. That’s not a correct assumption. Most of the techniques I teach in regards to plaiting and dropping strands are exactly what I do with my bullwhips. Using Ron Edwards’ book and some other online tutorials, it’s not too hard to go from cow whips to bullwhips. So far, I have had a number of people to make bullwhips using my DVD combined with a the other resources. (And yes, there is a bullwhip making video in the works, but I do not have a targeted release date yet!) 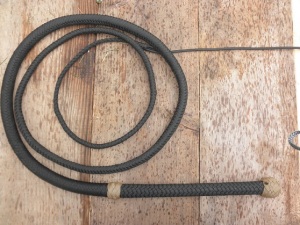 Noah tells me he figured out how to make the bullwhip using the DVD and by studying the 6ft bullwhip I sold him last year. It looks to me like he’s done a really nice job. 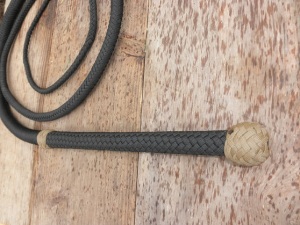 There was time as a whipmaker that I saw other upstart whipmakers as a threat to my business and I would’ve never thought of giving out as much information as I do on my DVDs. After a decade online, I’ve come to a place where I know I cannot possibly make all the whip orders that come my way and I need other whipmakers to help me out. It actually makes me happy to see people being able to make nice whips using my DVDs.

For many of my DVD customers, they have already been able to sell some whips and pay for the investments they made in the DVD and whip making supplies! These folks didn’t just buy a “how-to video,” they invested in a rewarding hobby that will more than pay for itself in a short period of time.

If you’re interested in making whips for yourself or for profit, I encourage you to get a copy of my Florida Cow Whip Tutorial DVD today!

Email me at Rhettswhips@yahoo.com for more information.

To order, send $85.00 via Paypal to Rhettswhips @ yahoo.com or you can send a check or money order to me at:

I am Rhett END_OF_DOCUMENT_TOKEN_TO_BE_REPLACED
This entry was posted on Saturday, January 8th, 2011 at 8:16 am and posted in bullwhips, Cow Whips, for sale, nylon whips, video, whip makers, whipmaking, Whips. You can follow any responses to this entry through the RSS 2.0 feed.
« DVD Customer’s First Whips!
Whip Making DVD Available at Ubraidit.com!! »