We’ve had yet another death in our family this month.

My father-in-law in Florida became ill last week and died unexpectedly Friday. Our family has been in Florida since early Friday morning the exception of a quick solo trip back here to take care of some loose ends today.

I was already running behind on orders from February which was made worse with the passing of my grandmother on May 5th.

I have been trying my best to work on some orders that were able to be made pretty much anywhere, so I’m trying to make the impact as little as possible.

Unfortunately, I am only going to run further behind as a result of this latest sad event.

I appreciate the continued patience of those of you waiting on orders. I’ll do my best to double down and get somewhat caught up once we all return from Florida this coming weekend.

It was a difficult decision to leave a 16+ year career to step out into the unknown. All I knew was that I was really not pleased with being in retail management and that it wasn’t what I wanted to do with my life. The impact of the job on my family was totally unacceptable.

The day I left that store I had no idea if this would work. I had maybe two dozen whip orders and a website that needed a facelift in a bad way. What I mostly had was the determination that I wasn’t spending one more hour in that store unless it was as a customer. At the time, that was all the motivation I needed.

Without the good providence of God, and without those of you who buy and use my whips, this venture wouldn’t have survived 2 months. Your orders allow me to provide for my wife and our five children. For that we are truly thankful.

Leave a comment   |  tags: family, self employment, thank you | posted in family, whipmaking

Cordell and I just returned from a father/son fan appreciation trip complements of the Respect Outdoors TV show that airs on The Sportsman Channel. Host Robert Arrington took us on an amazing trip to Panama City, FL. where we got to check out the F-35 Joint Strike Fighter at the 33rd Fighter Wing at Eglin Air Force Base.

The next 2 days we spent fishing Red Snapper and Amberjack fishing 40 miles out in the Gulf of Mexico. Robert has fished all over the world and says that he’s never seen such great fishing. The Leveral family of Family Tradition Charters in Panama City put us on some great fishing action. The trip was being filmed and will appear on an upcoming episode of Respect Outdoors.

I first became acquainted with Robert a couple of years ago when he contacted me about purchasing a 12ft cow whip. If you watch his show regularly, you can sometimes see Robert cracking  the whip I made for him. Below is some fun footage I took of Robert Arrington cracking one of Cordell’s cow whips on the stern of the fishing boat “Best Bet.”

It’s not often opportunities like this come along. I really appreciate Robert Arrington for selecting Cordell and I for this trip. We had a great time, ate some great seafood, caught some nice fish, made new friends, and made memories that will last a lifetime.

I am happy to announce that my newest son, Vance, was born on Thursday. He and my wife are now home and doing well. For those keeping track, this is child #5 for us. Vance is my 4th son.

With the new addition, I am scheduled to be on leave from my job for about 3 weeks. My plans are to help with the baby and really work hard to knock out as many of the whips on my list as possible. I have already made 2 since Friday. If memory serves, my friend Joe Driver made 8 whips in about 4 days during the Christmas rush last year, so I’m going to see if I can accomplish something along those lines while I am off. If I could make 30 whips in the next 3 weeks without my hands falling off, that would be awesome… Wish me luck.

(And Even if I am not able to make 30 whips during the next 3 weeks, I’ll hopefully be able to knock down a significant amount of time on everyone’s wait for their order. That’s the main thing I hope to accomplish.)

I’m also hoping that I will be able to get some more work done on the whipmaking video we are going to produce. That will largely depend on my wife’s recovery time from having the baby and if the baby will sleep long enough for us to do any filming in the evenings.

The Whip That Started it All!

We had a very rare Winter storm here in Georgia yesterday evening. The snow started falling around 5 pm and lasted well into the night. My kids and I stayed out in the dark and made a snowman, a “snow cowboy” actually. His name is Larry and as you can see, he prefers to use nylon whips because the snow doesn’t bother them at all! 😉 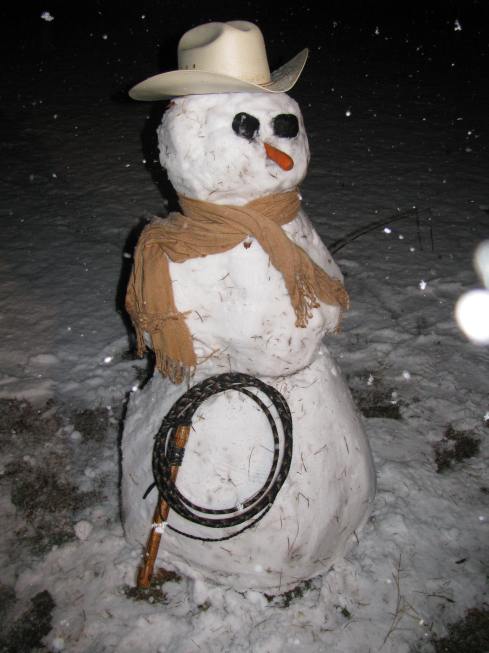 As 2009 now comes to a close, we witness the passing of what will be remembered as a tough year for lots of people. But even in a difficult economy, I’ve seen that people continue to buy whips; thus 2009 was a great year for my business. I had many wonderful customers who provided me with plenty of whip orders to fill even when the hours at my job were lacking. In this final post of the year, I would like to highlight some accomplishments and say thanks.

As you can see, 2009 was a busy year. I’m looking forward to what 2010 has in store.  I appreciate all the customers who helped make it possible. Thank you so much! You’re the best! 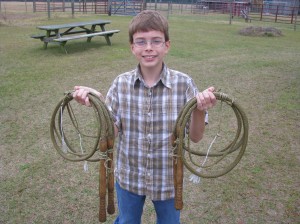 Earlier this year, my son Cordell took an interest in learning how to make whips. After lots of plaiting practice, he made a whip for himself . At that time, he was still 9 year old, beating the age I started plaiting by about 4 years.

In September, he was given an awesome opportunity. A long-time customer of mine needed a sizable order of Florida cow whips and he needed them much sooner than my back-log would allow. I asked him if, for the sake of time, he would be interested in having Cordell make the whips. After sending him a sample whip, the fellow ordered 4 more!

Ather reason we are very excited about this order is because  all the whips are destined for a cattle ranch in Cameroon, Africa! According to our customer, this will be the first time whips have been used herding cattle on this ranch. I am hoping we will get some photos of the whips in action in Cameroon. Cordell plaited the whips and we got them mailed out in the nick of time.

As you might imagine, words can hardly express the feeling of being a father and having a son that genuinely wants to learn your craft. Making whips has been very rewarding for me on a number of levels and what my son is doing now is just icing on the cake.

Because of his age, Cordell has many other priorities at this time and only takes order for his whips on a limited basis; I handle the order details and business transactions on his behalf.

The last two months have been very busy. Work picked up at my job, so now I have returned to being a “part-time whipmaker.” With that, I have gotten behind schedule on my orders. I am currently working on orders from early July. I hope to be done with the July orders by the first of December. I currently have between 25 and 30 whips on the slate to be made. If you’re still waiting, please hang in there as I am working feverishly to get to everyone.

In other news, at just 10 year of age, my son Cordell will be finishing his second whip order very soon. He is currently working a large order of 6ft cow whips that are destined for a cattle ranch in Cameroon, Africa. As you can imagine, I am very excited for Cordell and quite proud of him.  Cordell’s whips are currently $11.00 per foot.  Cordell only takes on a limited number of orders each month due to school and other activities.

The latest exotic wood that I have turned for cow whip handles is Mopani. This African wood is very hard and makes a very nice looking handle. I have a picture of the new handle in my exotic handle gallery.

That’s all for now!

Here’s the follow up post to the announcement about my son making his first cow whip. You’ll have to pardon me in this post as this is simply one really proud dad boasting to the world about his offspring’s accomplishments.

As you will see from the photos, Cordell did a good job on his whip. I know I’m a bit biased, but I really think his first whip looks better than some of the stuff I’ve seen on eBay lately.  I made the bocote handle for him; however, you can’t deduct too many points for that because there’s lots of people who make cow whips and get their handles from other people. He would’ve tried to make the handle too, but I didn’t think he was old enough to run the lathe.

I hope what I’m seeing this week is the start of a family tradition. I’ve never pressured them to make whips, but now that my children are taking interest in it, I’m going to do all I can to encourage it.  If each of my children could plait their way to a nice college fund, that would suit me just fine!

Cordell and his finished cow whip

And not to be outdone, Cordell’s 7 year old sister is right on his heels. She too has taken an interest in plaiting. Lately, she’s been grabbing up scrap pieces of nylon and working on small plaiting projects trying to learn the various plaits. Here’s a couple of pictures of Summer and her projects:

(Something I just noticed about this photo… For some odd reason Summer is wearing all camoflauge. This is rather unusual because her favorite color is pink and everything she owns and wears normally has pink in it. I better save this picture!)

Synthetic and Supersonic
Blog at WordPress.com.