A Reply to Robert Dante’s Article

Let me start by pointing to the article in which I am about to reply. It was written by Robert Dante and is entitled When Having Principles Hurt.

There needs to be a few things cleared up and I will allow you to decide what’s the truth as I post my entire OP and comment on it piece by piece. The first part of my OP on my personal Facebook page stated the following:

I have refused to do business with people who said they intended to use my whips on other consenting adults. They kindly took their business elsewhere and didn’t involve lawyers or the government. That’s how free, civilized people handle such things.

Since at least 2002, I have stated on my website publicly that I do not endorse nor condone the use of a whip on another person and do not knowingly make orders for those purposes (other than martial arts perhaps). This should not be news to anyone who’s ever looked at the page on my site where I have my policies posted, especially someone who’s known me since my early days online selling whips.

I have never sought after that market. That there are cowboys who go to conventions that do it is of no consequence to me. I’m not into it. Never have been, never will be. Sorry, that’s just me. Robert says he’s surprised I didn’t know what he did with the whips? Well, I’m equally surprised he didn’t know where I stand on this! I’ve never made it a secret.

And now for the rest of that most terrible, offensive, and misunderstood part of my OP:

Here’s the deal: If you use government to force Christian bakers to cater gay weddings against their conscientious objections, then we will have to force gay bakers to cater Westboro Baptist events against their conscience. How about forcing Jews to cater neo-Nazi events? Forcing black folks to cater KKK events? etc.. Think about it. (Not to mention the fact I don’t want someone preparing my food after I’ve taken them to court!)

My only point here is that government forcing people to do business with others against their values is a slippery slope. It may sound like a good idea when it benefits you or people with your shared values, but what happens when that same government force is applied all around equally? Thus, this is my reason for using these other examples.

My comparisons here were never, ever meant to equate gays to Nazis or the KKK, but simply to point out that making Christians/Muslims/others cater weddings against their religious beliefs (recognizing that freedom of religion is historically one of America’s most cherished ideals!), it will open the door to people like Westboro Baptist suing gay bakers to bake them cakes against their will. (And don’t think WBC won’t try!) What is so hard to understand about this? Is this not a legitimate concern? Or can’t we think beyond the most recent media spawned outrage?

What Rhett has done is the equivalent of saying that because someone likes oral sex, he/she is prone to walk down the sidewalk biting people at random.

No, I wrote nothing of the sort, nor did I imply anything like that! This is just slanderous and makes absolutely no sense to me. It’s not even a logical inference to make from anything I wrote.

Robert, I’m sorry it has come to this. I wish you well.

Update: Robert has replied to this article. Please click here to read it.

A nylon bullwhip I finished over the weekend; going to Maryland: 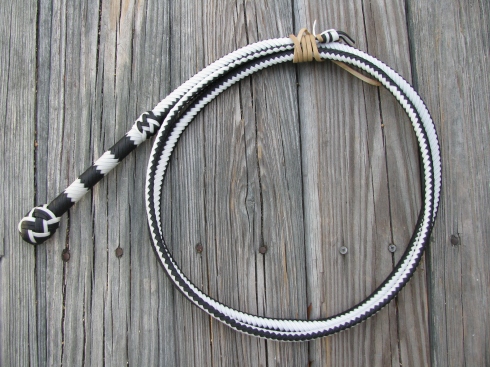 You can order your own here.